I was very excited when I heard about Sugru, I ordered it immediately and and was anxiously waiting it's arrival. On my to list were:
I was naively hoping Sugru was the silver bullet and could fix all these! I had a hack session the first weekend after my packets arrived.

I fixed all and waited a few days, reading on the instructions that it took 24 hours to set 3mm and calculated that I used thicker in a number of places , especially in the case if the repaired chair leg, there was maybe 1cm. So I left things 5 days to be sure.

Nothing really held that well with my daughter's chair not lasting that long and the Sugru seemed softer than it should be. But Sugru sent out a mail saying that a last minute tweak in the recipe had caused the batch to be bogus and they would send out fresh batches.

Jane (Ms Sugru) mentioned that it won't ever set 'rock hard' - it should set as a strong rubber, nothing like a car tyre but definitely stronger than what I experienced. Jane also noted that Sugru will never be as strong as a screw and shouldn't be substituted for them - it is designed to change the surface of things and not as a structural adhesive.

She also recommended trying epoxy putties like loctite repair express/araldite plumbers putty or mighty putty for the chair since they dry rock hard but do have very good adhesion. I had not considered that. 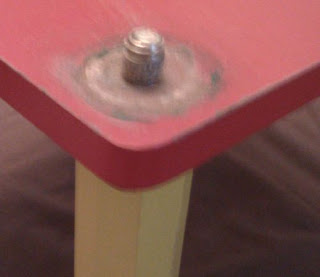 Problem chair, wooden back which goes onto this has stripped thread


I did try some epoxy putty wrapped around the base of the back which goes on top of two threaded bolts (one shown in the picture). It lasted longer than the Sugru but broke within a week. So I am still looking for a solution!

As regards the other projects, well, we recently moved house and the broken chair and loose sink and spoiler stayed! I'm not sure Sugru is suitable to hold the strainer handle and I finally gave in and threw out the cheese cutter and bought a new one.

I received my replacement Sugru towards the end of April and it was about time I gave it a test. A 50% voucher as a thank you for staying with Sugru recently was a reminder. And then a candidate reared it's head!

This week I tried what I hope survives as my first proper hack. One handle of a rolling pin had split years ago and had not stayed glued/taped together. The metal axle did not protrude that far so I did not want to make the Sugru handle too long. I used 4 10g packets of Sugru, it's not shaped as well as it could be but not bad. Having let it set for 48 hours I gave the axle a spin tonight and it moves freely and seems solid to handle. We'll see how it holds up with use!
Posted by board tc at 00:05 No comments: